When a penalty seems unfair, the best response is to do well. Vesti proved this when, in the weekend's main race on the high-speed track Monza, he came out victorious and took the biggest victory so far in his career.

Being penalized after qualifying was hard to digest. We had been told in advance that we were not allowed to block each other in qualifying. But that was exactly what happened last weekend at Spa. Together with my teammate Oscar Piastri, I was caught between two groups of drivers. The people in front braked and slowed us down. Piastri and I had nowhere to go, so it also affected those behind us. We were quite a few drivers who were summoned to the judges afterwards and it was clear that the judges needed to set an example. We were 9 drivers who got a penalty. I had to give up 3 positions in my qualifying, which had gotten me as far as p6. Had I not received the penalty, I would have started 2nd on the grid.

But perhaps the aggression in the body was what it took to really get Vesti going in the first race. A race that offered lots of drama, action and world-class race.

I lost a few positions in the beginning, so I didn't make it any easier for myself. But today I had a car that could make it. And I was SO turned on after a lot of irritation over the ruling of the judges the day before. It was duel after duel and I especially enjoyed managing to brake extremely late and overtake Liam Lawson and Theodore Pouchaire, with whom I both fight for the overall 3rd place in the championship. My very last overtaking, which was on Pourchaire, ended up giving me the win. I'm overjoyed right now after a race where I took advantage of both my own and the car's full potential. 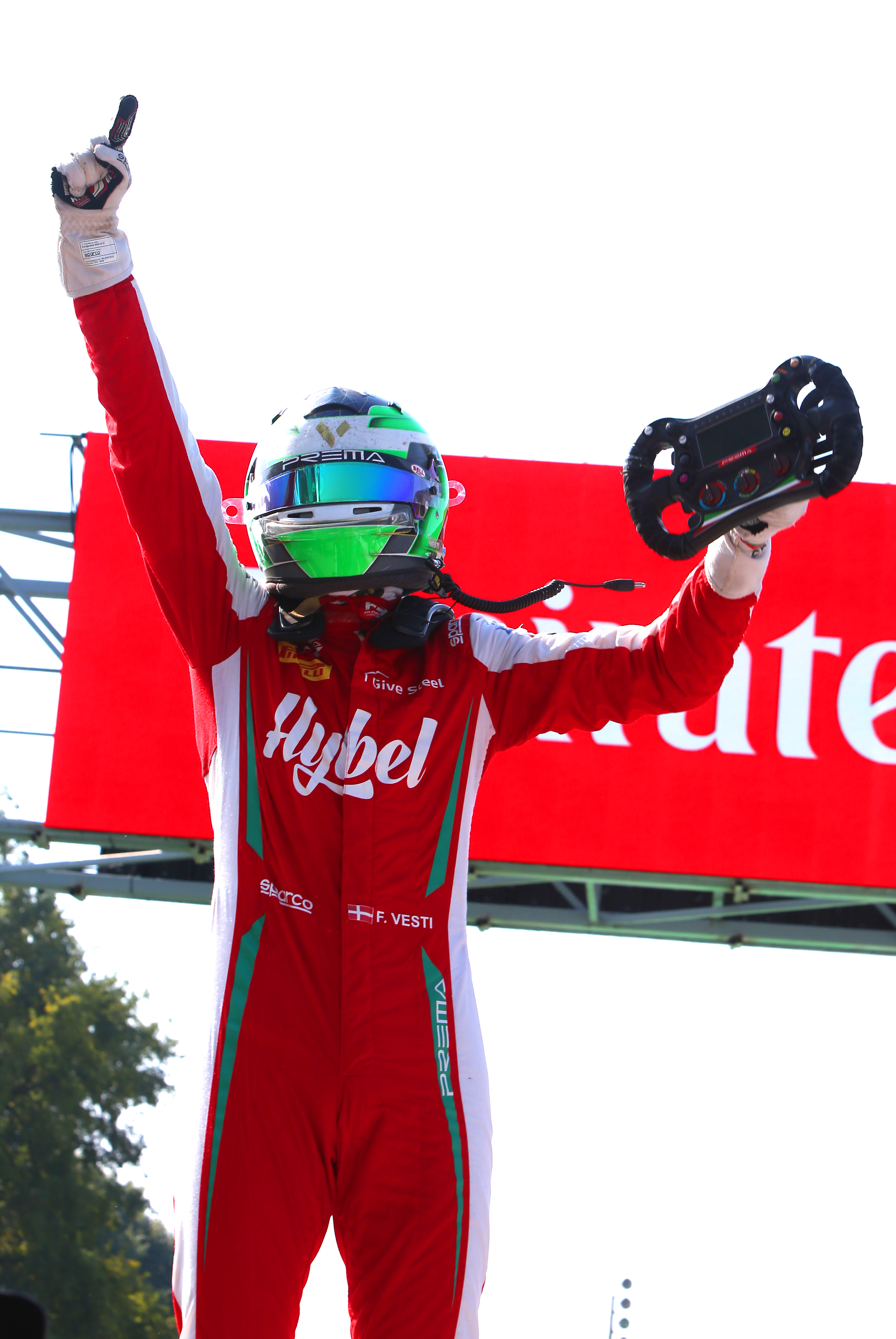 Race 2, on the other hand, ended with great annoyance. But yet again after another race that got Vesti ahead. Starting P10 due to the reverse grid in race 2 and some exceptional consistent and fast driving moved Vesti all the way up to P3, before the tires gave up. Teammate Logan Sargeant and title candidate seized that opportunity to overtake on one of the last laps, but in the attempt unfortunately pulls in front of Vesti and "squeezed him in Ascari" - punctures himself and thus risks his championship . Vesti's front wing was destroyed. Quite unusual for Prema to have all three drivers retired from the race.

I had the speed today, but struggled with my tires and lots of under steer in my car. That was the reason I did not have the opportunity to get past Liam Lawson P2, even though it was very close. I then got strongly challenged by my competitors from behind especially after a safety car where the whole field gathered. I defended the best I knew how but was eventually overtaken by 2 competitors. And then I get into the accident with my teammate. It's hard to cool down after these hardships. But yesterday's victory was yesterday. Today is a new day with challenges of its own!

Sargeant is penalized for the accident, but it costs Vesti dearly. Vesti, who before the second race was only 6.5 points away from the overall third place in the championship, will now be even more challenged with a race scoring no points and right before the final race of the season taking place at Mugello in Italy. It's happening next weekend.